One country at a time

Driving in Cuba wasn’t as difficult as we thought it would be.

It required some planning, but it turned out to be a great way to see more of the country.

We travelled in January 2017, which happened to be one of Cuba’s busiest ever tourism months.  We had heard so many conflicting reports about road conditions and driving in Cuba that we waited until October 2016 to decide to rent a car. That was a mistake. We tried to book a car in Havana for our entire time in Cuba (2 weeks), but were unable to find one. The first week in January was just that crazy busy and there were no more cars to be had.

We eventually arranged to pick up a car in Camaguey that we would have for five days, returning it to Havana at the end of our trip.  So we changed our plans on how we would explore Cuba, flying from Havana straight to Santiago de Cuba and then working our way west by private car and bus to pick up the car in Camaguey (see Getting Around Cuba post).

During our first week, we did come across other travellers saying that it was possible to get a car if you were prepared to wait in a line (see our post on How to Line Up in Cuba) at one of the car hire places and had flexible accommodation arrangements. There was also a kiosk outside Havana airport that appeared to be renting cars, but they may have been pre-booked.

Like everything else in Cuba, hiring a car online from the other side of the world seemed a little risky and uncertain, but it all turned out just fine. There was only one car at the Rex car hire place in Camaguey, but it was ours.

Processing the paperwork with very little Spanish was trying at times, but our Google Translate app saved the day once again. You will need a credit card for the holding deposit and the extra insurance and first tank of petrol (you can pay the insurance and petrol in cash) and you will have to be prepared to wait for them to call through the details to get authority to process the transaction. Mastercard and Amex won’t work, nor will a Visa card issued by an American bank (we used an ANZ Visa card).

Make sure you take photos of any marks or bumps on the car before you leave. Photograph your number plate as well. Find out how many litres the petrol tank will hold as when you go to buy fuel, you need to nominate how many litres you want to pay for (see Getting Petrol at the end of this page). You must pay the company for the first tank of petrol and you return the car as empty as possible!

Most of the hire cars are newer models, so modern conveniences like air con, CD player and tinted windows are a given. Our car was a Chinese-built MG 4-door sedan with self-locking doors. We had booked a more basic car, but we were given a luxury model.

Most of the roads between cities are not particularly busy, but the variety of vehicles using the road is astounding. Judging speed and distance for overtaking a horse and cart, a 50 year old tractor, a motorcycle with a helmet-less passenger sitting side-saddle behind the driver and a truck full of standing passengers is a challenge. 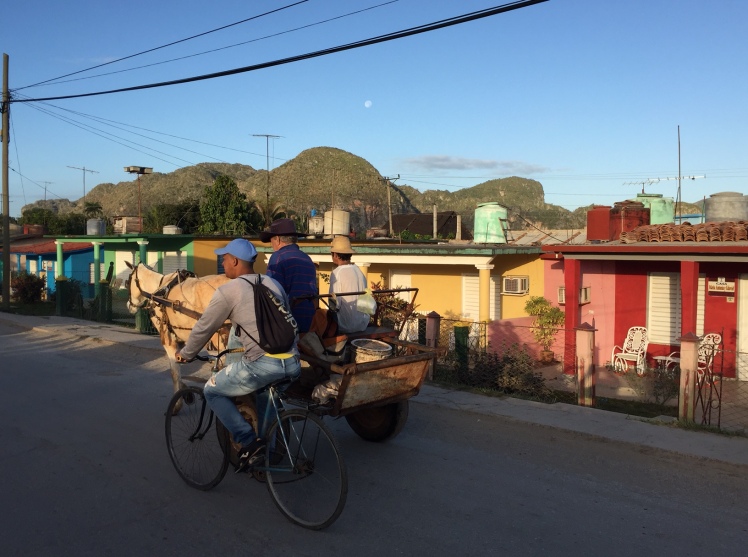 However, the Cubans have a few simple rules to make this process easier.

Toot your horn when you come up behind a slow vehicle – the older the vehicle, the less chance it has side mirrors or even a rear vision mirror, so the toot is a courtesy to let them know you are there. Put on your left indicator to show you want to overtake, even though it may take a while before you can actually overtake. It lets everyone behind you know that you plan to go when it’s safe to do so.

Many of the horses and carts will move to the verge to make passing easier, but it’s not always possible for them to do so. Don’t be impatient! Cuban drivers just wait in a line until it’s (mostly) safe to overtake. Watch how the locals drive and do the same. 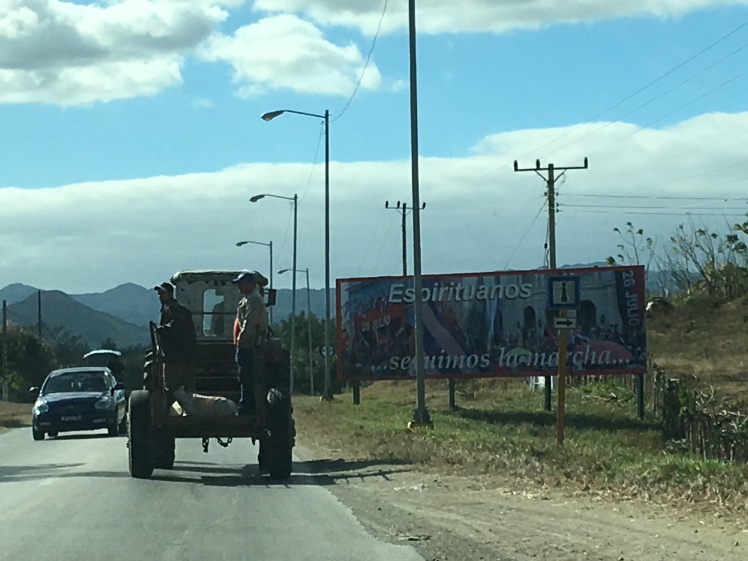 The potholes, baches, can be savage. Keep an eye on any any traffic ahead of you – if you see them suddenly swerve to the other side of the road or slow down drastically – follow suit!

The autopiste is a huge road, with even less traffic on it than the smaller roads. The extra space makes it easier to dodge the baches, although we still found ourselves clunking too fast through the occasional one that would sneak up on us! There are speed limits on all roads, but we found the Cubans treated them more as advice than a hard-and-fast rule. Most cars are the older American 50s style or Ladas, so they drive more slowly anyway, even on the autopiste.

Due to the poor road surfacing, lack of regular signage and street lights, driving at night is not recommended.

On the autopiste near Vinales we had a couple of near misses with people on the side of the road trying to sell cheeses, chickens and fruit.

Some of the underpasses were also used as waiting zones for hitch-hikers. Locals would never drive around in an empty vehicle. If they have a spare seat, they will always pick up 2 or more passengers to help them along their way. 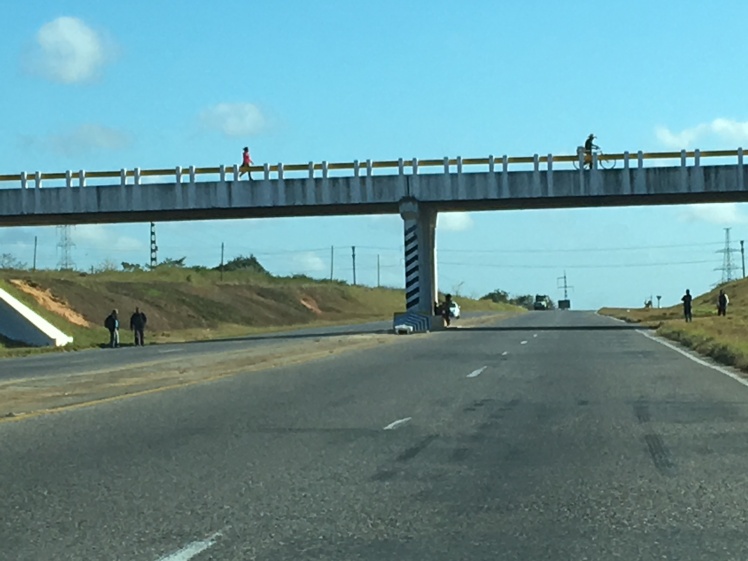 However, Cubans are not allowed to pick up foreigners at all, unless they have a taxi licence. Our drive from Santiago de Cuba to Holguin was in a private car and our driver’s taxi licence was checked before we left town.

We felt a little guilty driving by locals in need of a lift, with our back seat empty, but our Spanish was not good enough and our understanding of how this system worked was not sure enough (& everything in Cuba has a system).

The autopiste was also devoid of the big petrol station stops that we are used to seeing dotted along our highways. To get fuel, food or a toilet, you have to leave the autopiste and go into one of the towns, or make sure you have enough of enough of everything before you turn onto the autopiste.

There were no roadsides options at all between Australia and Havana and we only spotted one food and toilet stop (but no fuel) between Havana and the turn-off to Vinales.

The best app we used during our whole time in Cuba (besides Google Translate with its offline Spanish option) was MapsMe. We downloaded all the maps for Cuba before we left home, which meant we had offline access to every road in Cuba. The routes MapsMe chose were generally spot on and it got all the turns and roads correct. The only thing that was constantly inaccurate was the travel time between cities – our trips were always much faster than MapsMe calculated (it may be based on travel with Viazul).

The only scam we experienced whilst driving was on the way to Vinales, at a little town called Entronque de Las Ovas. Although ‘harassing’ tourists is illegal, in some of the smaller, out of the way places, a little hustling may occur. We had met up with a Dutch family the previous night in Trinidad who told us about their driving experience in Vinales, so we were prepared. (See Cuban Hustles)

We never had to pay anyone to watch our car whilst we parked. But several of the touristy spots (ie lookouts, caves, historic houses) had attendants who charged a parking fee. Apparently stealing from a tourist has a high gaol sentence, although fleecing them gently is just par for course.

Driving in Cuba is fine. City streets are narrow and country roads have plenty of pot holes, but it’s all manageable and will allow you to travel at your own pace, on your own schedule, to the places you most want to see. Booking a rental car from outside of Cuba is expensive – it cost us around AUS$160 a day, including the extra insurance we were required to buy. It may not be a cheap option, but it was the best option for us.

Getting Petrol in Cuba

When you rent a car in Cuba, they will tell you how many litres the petrol tank holds. It’s important information – write it down – because putting petrol in your car in Cuba is a process with many steps.